It was energizing and educational to be home for the Solstice Weekend in June and the Fourth of July work period, catching up with so many of you!

Before I update you about my work in Washington, D.C. and across Alaska, I must share with you my extreme disappointment that the Obama administration is cutting 2,600 soldiers from Fort Richardson and 75 from Fort Wainwright. This does damage to our national defense capability as well as our state’s economy.

I am troubled that the administration is making such short-sighted decisions and ignoring the threat presented by Russia, China and North Korea. It simply sends the wrong signal at the worst time.  The Secretary of Defense says that we need to develop a robust defense from the west.  Every cabinet official and military commander I speak with acknowledges the need for a strong Arctic posture. I commit to you that I will continue to challenge this decision and seek a more responsible outcome to defend our nation in this vital and volatile region.

You can listen to more of my thoughts I shared with Alaska Public Radio on this issue by clicking here.

Out and about in Alaska

I had the opportunity to celebrate the 240th anniversary of the founding of the United States Army at the Army Birthday Ball in Anchorage. In Alaska, we value our U.S. Army and all our military every day. Nothing is more important in deciding where to base the finest soldiers in the world than a community’s commitment to the military family, and I’m honored to witness our state’s strong support for our military. 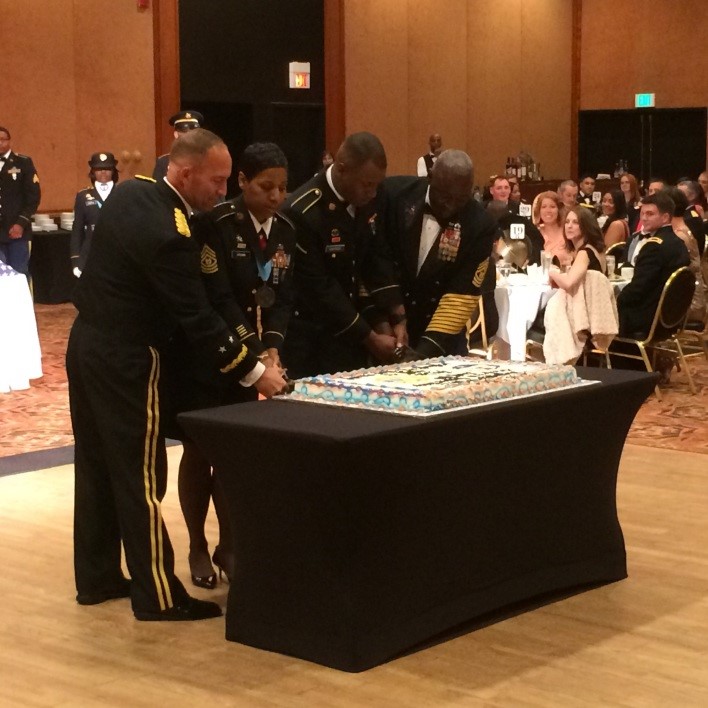 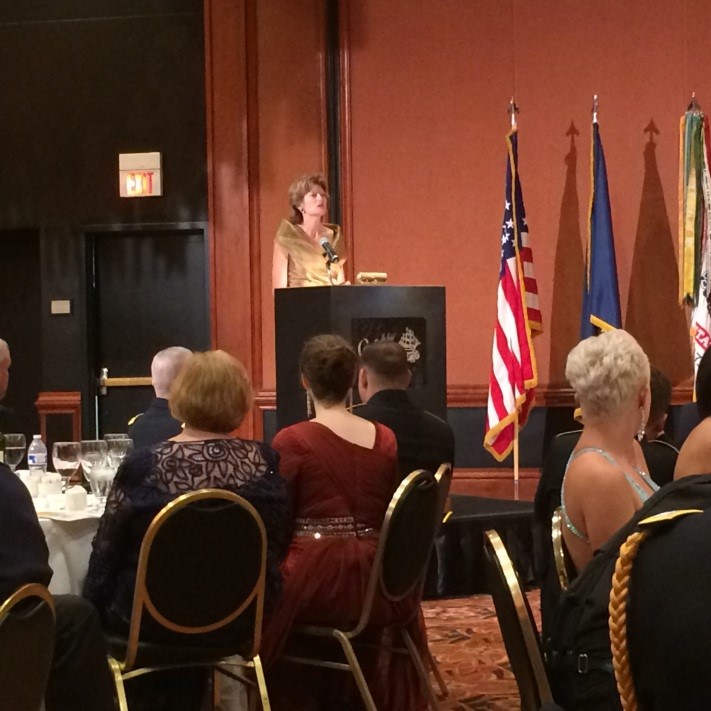 It was great to spend the longest day of the year cheering on and passing out water bottles to participants in the Midnight Sun Run in Fairbanks. Over 3,000 people, including my colleague Senator Dan Sullivan, hit the pavement to enjoy the uniquely Alaskan event. From elite runners to walkers and the spectators that cheered them on—it was great fun! 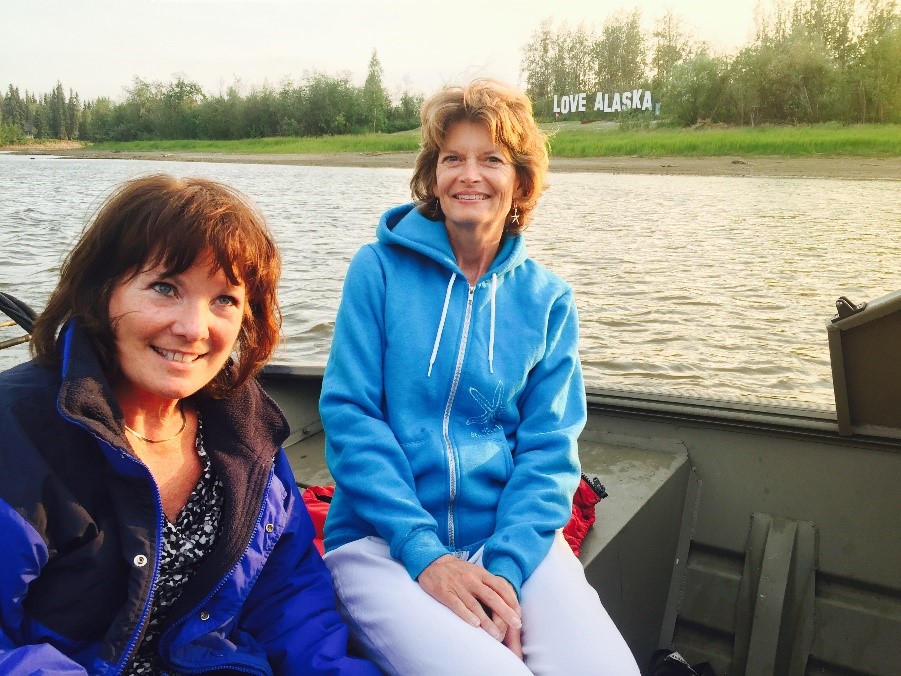 Boating on the Chena River! With my good friend Jeanne Ringstad on our way to the Midnight Sun Run in Fairbanks. 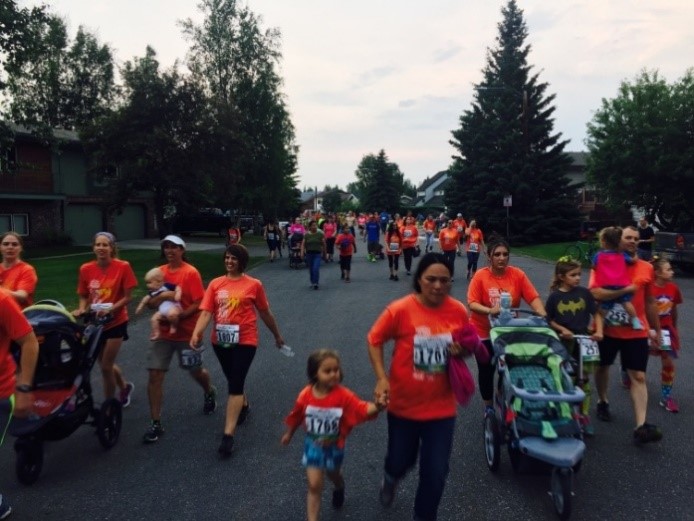 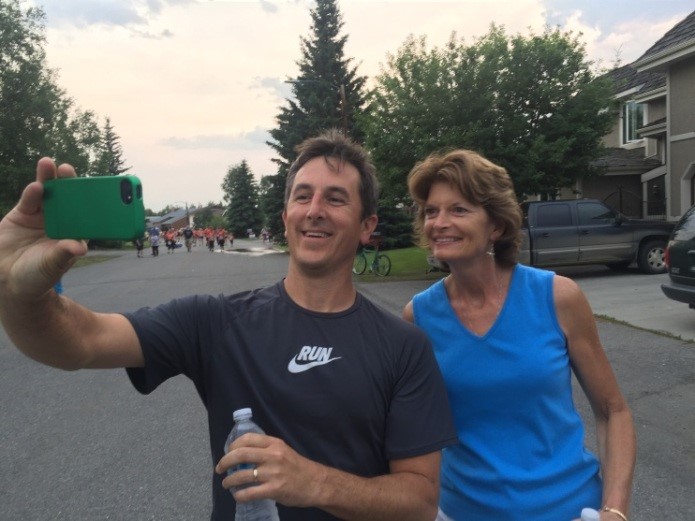 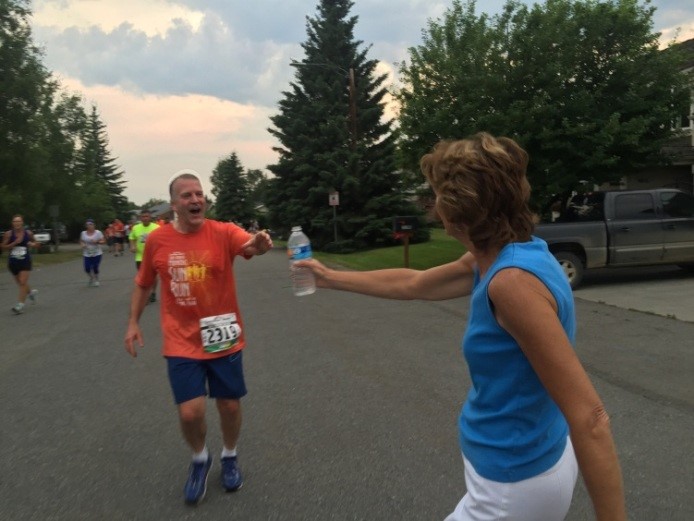 Handing out water bottles to the runners and walkers at the Midnight Sun Run. 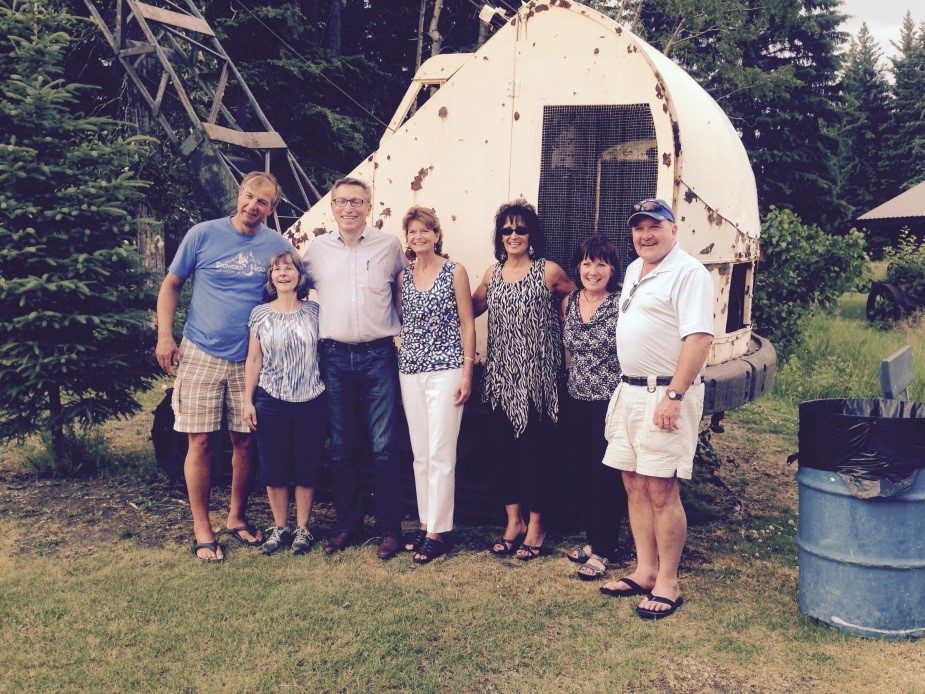 With some of my classmates from Monroe High School, Class of 1975, celebrating our 40th high school reunion in Fairbanks. 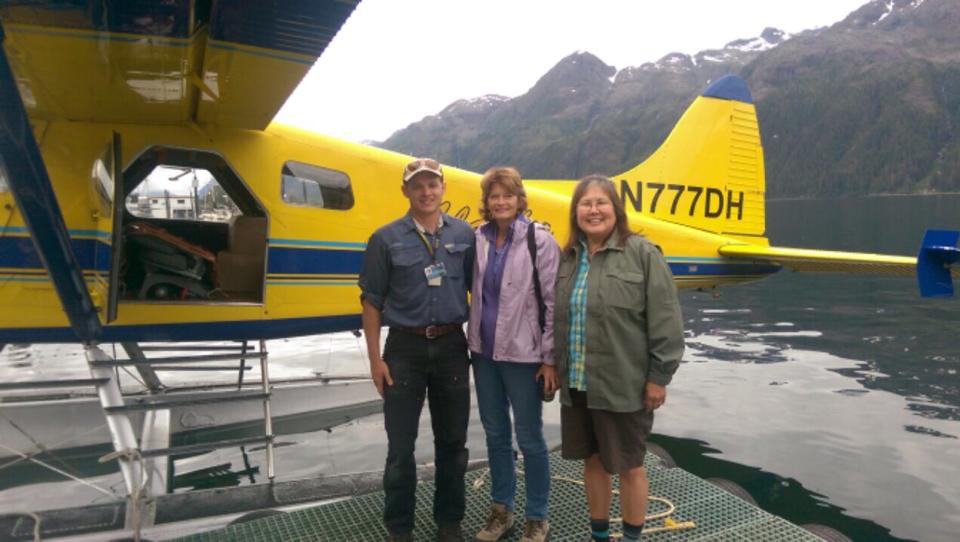 The Southeast community of Pelican may be small but it has a lot to offer—from commercial fishing to tourism!

I was up in Barrow to celebrate with the whaling captains and community members as they shared their successful whaling season! It was such an honor to witness the culture of sharing within the subsistence lifestyle. 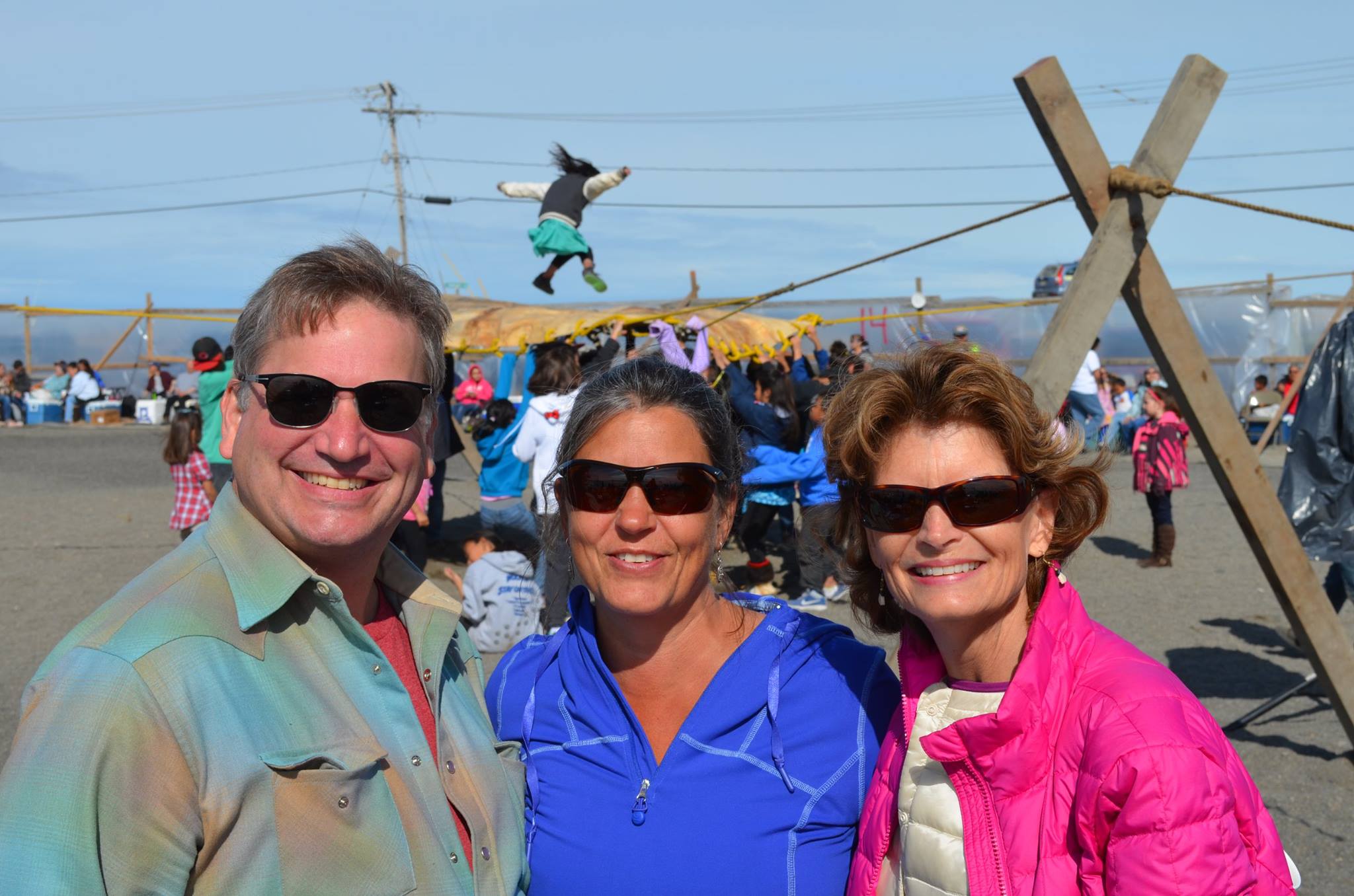 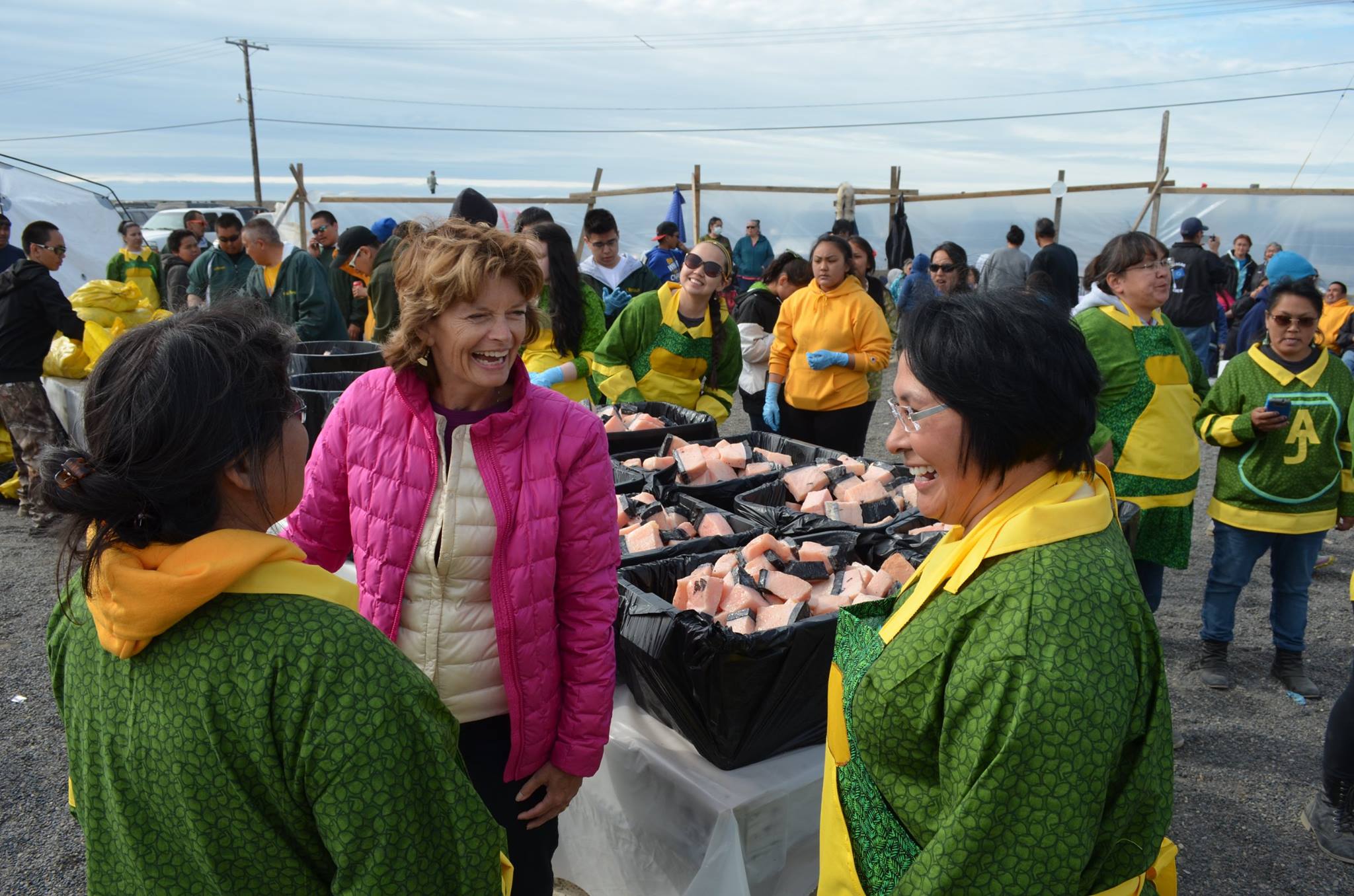 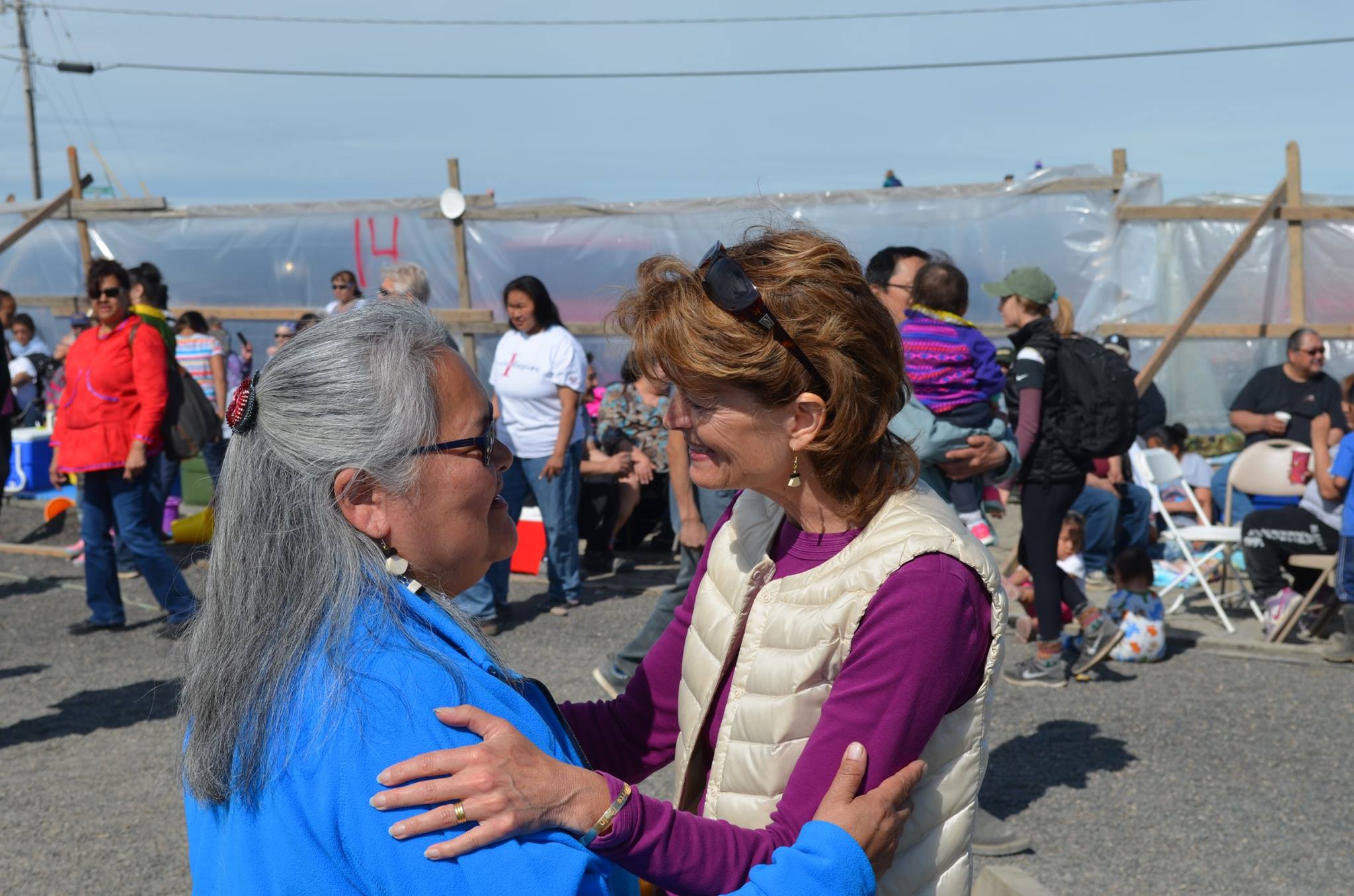 I was able to spend time at Joint Base Elmendorf-Richardson, to witness and learn more about the amazing things our soldiers and airmen do in Alaska and around the world. I received a military operations update, met with airmen returning from the Nepal earthquake relief missions, got an up close look at the C-17s and F-22s, met with Guardian Angel airmen, and toured some of the base facilities. 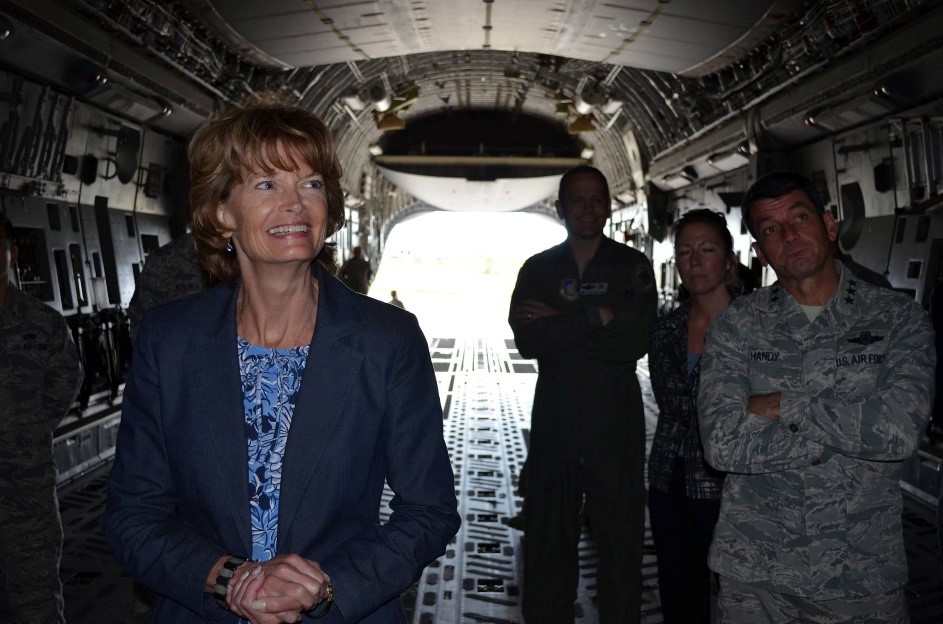 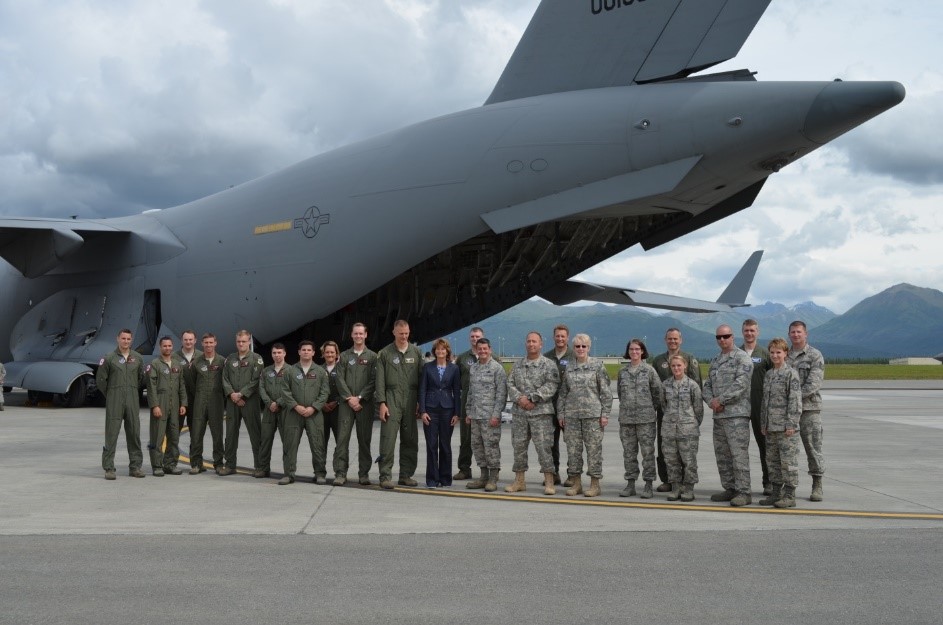 My visit to the village of Igiugig showed me what a healthy, innovative, and self-sustaining community it is. I was impressed with all of their renewable energy solutions—from in-river hydrokinetic turbines to wind turbines to solar panels. 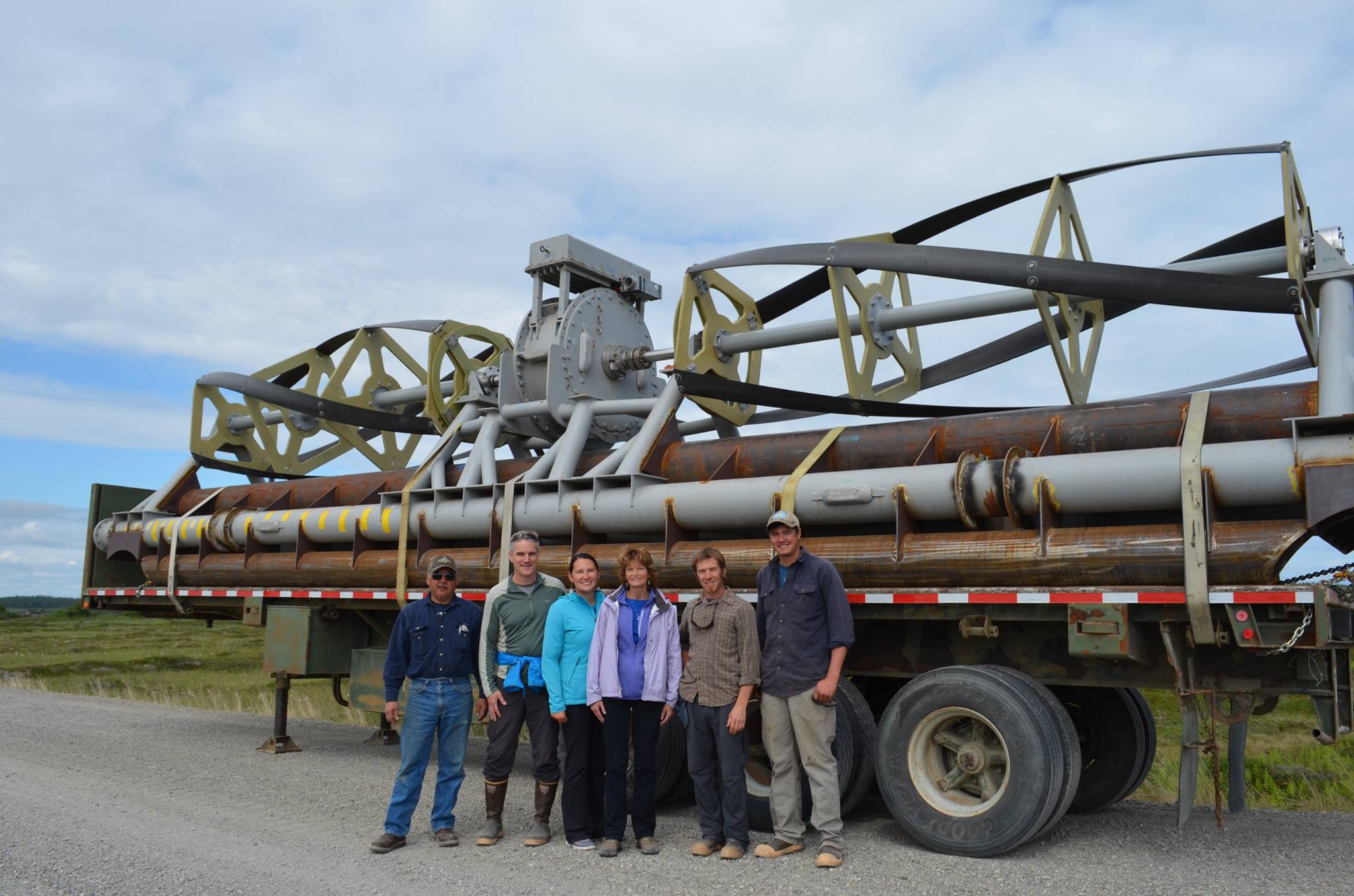 This run of river device has the potential to provide nearly 90% of Igiugig’s power needs. 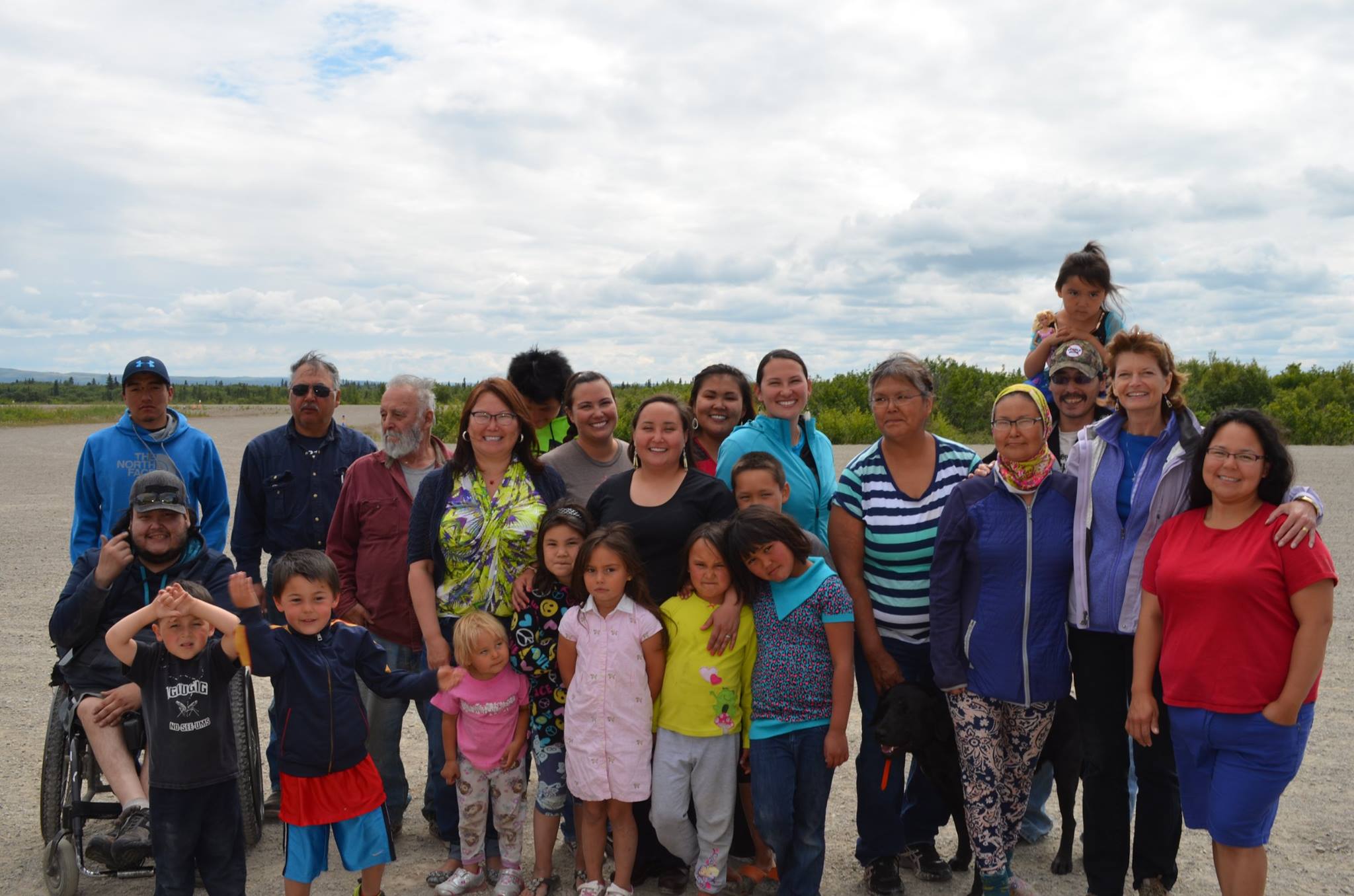 From the Mount Marathon race to the parade, Seward is an exciting place to be on Independence Day! I had a wonderful time watching and cheering on hundreds of incredibly-conditioned runners and had the honor of firing the gun to start the women’s race. The Mount Marathon Race is truly one of Alaska’s great traditions! 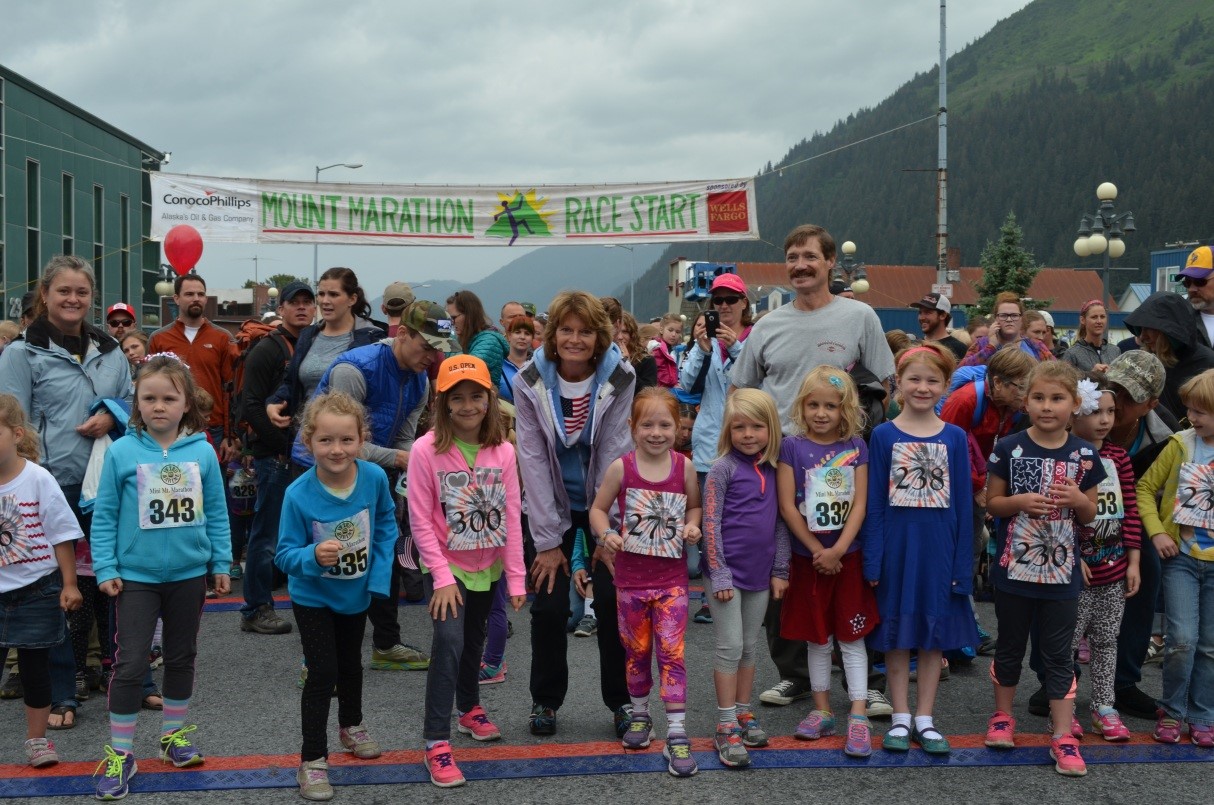 Little ones in training to one day run Mount Marathon! 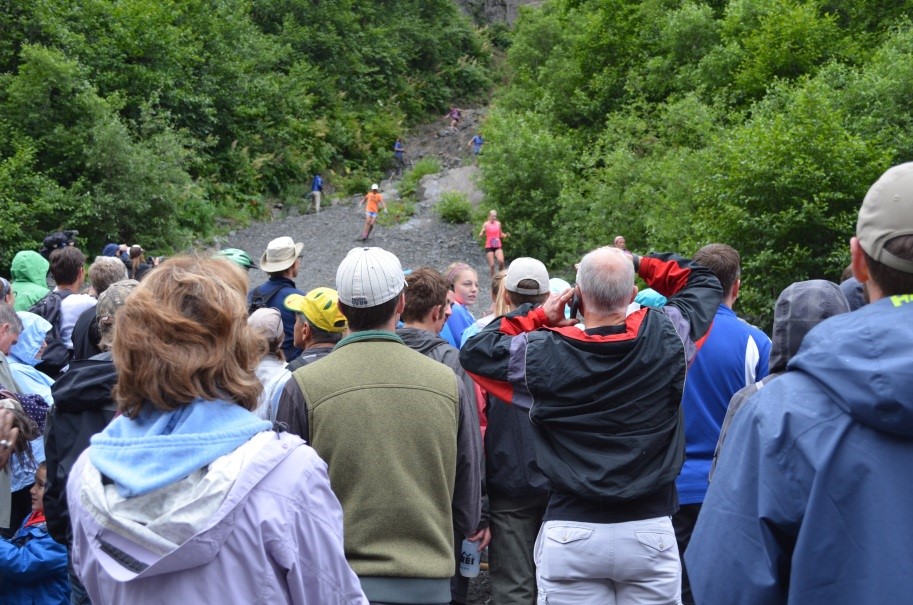 The chute is a great place to watch the race!

After leaving Seward, I headed down to Kenai to the Twin Cities Raceway to catch the dirt-track action. I even got to take a few laps! 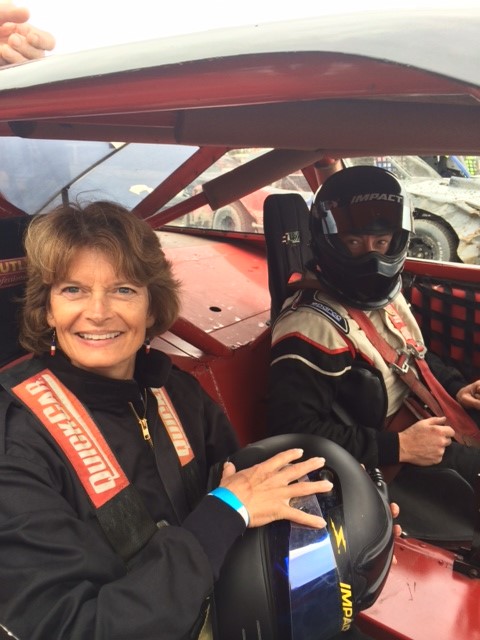 Back in Washington, D.C.

Alaskan Oversight of the Interior Department

My position as Chairman of the Interior Appropriations Subcommittee means that Alaska has a hand in directing the spending and oversight for multiple federal agencies that have a major impact on Alaska: the Environmental Protection Agency, Bureau of Land Management, Indian Health Service, Bureau of Indian Affairs, Fish and Wildlife Service, Forest Service, and National Park Service, just to name a few.

My staff and I worked hard to develop a bill that addresses the priorities of Alaska and our nation regarding our public lands, the environment, and Alaska Natives—all while staying within the law set by the Budget Control Act.

This is the first time we’ve had an Interior spending bill passed out of Committee in six years. The U.S. Senate is returning to working order and doing its job of governing and setting an agenda. 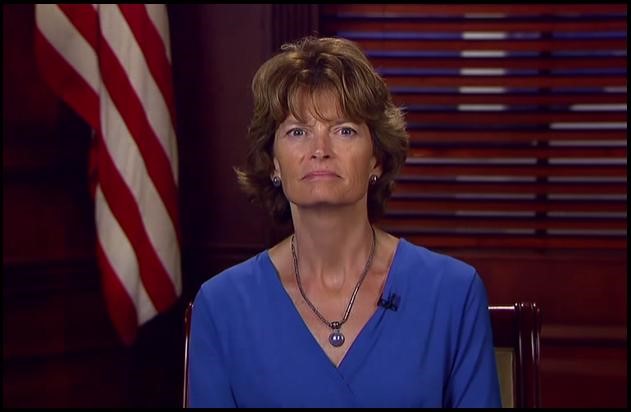 There’s a lot contained in the Interior Appropriations bill—here’s a quick rundown of some of the provisions. Click image to watch video.

Wildfires are on Alaskans’ mind with the number of active wildfires burning across the state literally off the charts, many which have caused serious damage. As Chairman of the Interior Appropriations Subcommittee, a key priority of mine was to address how we fund fire suppression costs. In my bill we provided 100% of the funding requested for wildfire preparedness and suppression (based on a 10 year average), ensuring that the resources necessary to combat wildfires are available without raiding other program accounts within the Forest Service.

The bill also makes over $1 billion in emergency funding available in case regular fire suppression funds are exhausted. With the record amount of wildfires burning throughout Alaska, and with the Lower 48 just now coming into fire season, this will ensure our first responders are prepared and equipped for next year’s wildfire season.

Blocking Harmful and Overreaching “Waters of the U.S.” (WOTUS) Rule

Of the many regulations coming out of the administration, none seem to generate more anxiety among Alaskans than the new WOTUS rule, which is a huge federal land grab. Our state has more wetlands than any other state and will be significantly harmed by this over-expansive regulation, adding costs and delays to development projects—whether it’s putting in a driveway or moving forward with a small hydropower project.

I included a provision in the appropriations bill that will block any EPA funds from implementing this rule that I believe is a “showstopper” for responsible development in Alaska.

KRBD radio in Ketchikan did a story on the bill, and you can listen here.

The Interior Appropriations bill also ensures that Alaska’s Native healthcare providers will have fully funded contract support costs (CSCs) for the second year in a row.

In the past, the federal government has underfunded these much-needed healthcare facilities—oftentimes leaving them sitting partially empty, unable to hire technicians or assistants to deliver health care. Our First People deserve better; they deserve to have the nation’s trust responsibility fulfilled.

This bill also redesigns how funding is organized for CSCs—the money is put into its own separate account, protected against other agencies who are trying to borrow from these resources.

KYUK radio in Bethel did a story on this issue, and you can read more here.

I also included language in the appropriations bill that authorizes the State of Alaska to pursue an exchange of federal and non-federal lands for the road corridor between King Cove and the all-weather airport in Cold Bay. Once the state elects to pursue the exchange, the Department of Interior is required to convey the lands to the State of Alaska. In the time since the Secretary of Interior rejected this life-saving, 10-mile, one-lane, gravel, non-commercial use road from King Cove to Cold Bay, there has been 25 separate medevacs to get people to safety and medical help.

The Senate voted on the National Defense Authorization Act, which lays out the Pentagon’s priorities and agenda for the upcoming year. In addition to ensuring support for the men and women who serve us, there were some provisions included that are especially relevant to Alaska.

I included language to promote better communication between military installations and sportsmen who utilize military lands during hunting season, in light of the recent Fort Wainwright and Fort Greely hunting grounds calendar dispute.  I also co-sponsored an amendment to halt plans to close some military commissaries—which could potentially raise prices by up to 30%—until a closer examination of the impacts and costs are considered.

Senator Dan Sullivan also inserted an amendment into the NDAA, requiring the Secretary of Defense to produce a detailed military strategy for the Arctic region and the Pentagon to provide a draft operation plan for protection of U.S. national security interests in the Arctic.