WASHINGTON, DC – As the United States commemorates Veterans Day weekend, Senator Lisa Murkowski is releasing her 18th Veteran Spotlight interview, focusing on the service of Kenai resident Herb Stettler who served in the U.S. Army and did a 13 month tour during the Korean War.  Stettler is an active member of the Kenai Peninsula veteran community, supporting fellow veterans and honoring veteran sacrifice at local events and ceremonies – and has fostered a special bond with his neighbors for years that was reciprocated when they rallied to his aid last year.

During his interview, Stettler recalls being 18 years old when he was asked to register for the draft.  At 20, he enlisted in the Army and his superior officers capitalized on his farm-honed strength making him a machine gun operator.  During his Korean War tour, Stettler says there were some “hairy times” and he was often called upon to provide machine gun cover for his fellow soldiers to escape enemy fire. 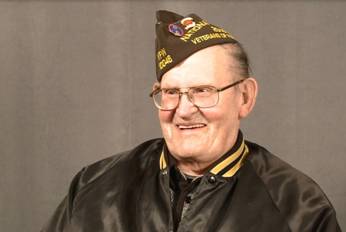 (Click on image for excerpt of Herb talking about one of his proudest moments of his Korean War deployment.

“I hope that the Lord took all of our men up there for defending the freedoms of our people,” Said Herb Stettler.  “For those of us who made it home, we are there for each other.  It’s a camaraderie thing with your fellow veterans.  You’ve got something in common.  You don’t talk about it much- you’re mostly talking about day to day stuff, but you are there to support each other.”

Stettler was awarded the Bronze Star and the Combat Infantry Badge for his service.  After he got out of the Army, Stettler made his way to Alaska, eventually settling on the Kenai Peninsula.  Today, at 82 years old, he is an active officer for the Veterans of Foreign Wars Post 10046 and the American Legion where he works to honor veterans, their service, and our country.  It’s a commitment the Kenai community returned in an overwhelming way last year, when his home burnt to the ground and the community came together to build him a house.

“My house caught fire.  It was a chimney fire that got away and the whole house went,” Said Stettler.  “The community came in and everybody chipped in and they built me a 10 x 34 foot cabin and put a deck on it and an addition behind it.  It is warm in there and it doesn’t take much to heat it.  They put plumbing in there and my goodness, I am living good.  I sure thank the community.  I owe them a lot.”

“Herb Stettlers’ story is one of an American hero,” said Senator Murkowski.  “He has served our country and returned home where he continues to support active duty military members, veterans and the community as a whole.  We owe it to veterans like Herb to honor them through sharing their stories, and we owe it to the rest of us to learn from the high levels of patriotism, commitment and service they demonstrate for us.”

The “Veteran Spotlight” project is Senator Murkowski’s monthly focus on an Alaska veteran of American conflicts worldwide to honor and draw well-deserved attention to Alaska’s men and women who served.  Today’s installment is the eighteenth in the series that began on Memorial Day weekend of 2012.  Every month, Sen. Murkowski posts a biography and an interview with an Alaskan who served our country abroad in conjunction with the Library of Congress’ Veterans History Project.  You can watch them all by clicking here.

Senator Murkowski invites all Alaskans to nominate a veteran from the 49th state to be featured in the Veteran Spotlight project.  If you have a family member or friend in the community you think has a story to share, email Spotlight@Murkowski.Senate.Gov.