Alaska has received $2.4 Billion and counting, as a result of the Infrastructure Investment and Jobs Act
Skip to primary navigation Skip to content

On the eve of Memorial Day weekend, Senator Lisa Murkowski (R-AK) spoke on the Senate floor to further describe the failings of the VA Choice Card Program in Alaska and outlined what steps need to be taken to ensure that Alaska veterans have access to quality healthcare, no matter where they live. 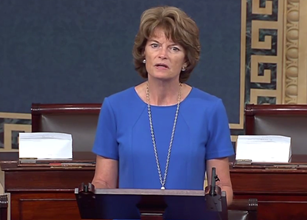 Murkowski opened her remarks by explaining that prior to the Choice Act being implemented, the U.S. Department of Veterans Affairs (VA) had developed an innovative system in Alaska, partnering with Native clinics and community healthcare providers to give care to veterans who needed services the VA could not provide or who lived in communities where the VA had no presence:

“The model was pretty simple. If a veteran needed to see someone outside the VA, they were placed with that outside provider by VA staff. And those VA staffers who matched the veteran with a local provider actually lived in Alaska. They knew Alaska's geography. They knew it wasn't possible to drive from Bethel to Anchorage. They knew the breadth and limitations on services available within our state. Also, the bills for services were sent to the VA; they were not sent to the veteran. If for some reason a provider wasn't paid on time, the veterans were insulated. They were protected from collection agency calls. It wasn't a perfect system and it wasn't without complaints, but on balance this was the best Alaskan veterans were ever treated.”

She then explained how after the Choice Act was instituted, the flexibility for veterans to access healthcare in their local communities greatly diminished. The VA actually cancelled appointments that they scheduled to veterans in Alaska and directed them to a contractor-operated 800 number in the Lower 48 to arrange for a new referral under the Choice Program. Patients were frustrated, providers were frustrated, and both access to and quality of veterans’ healthcare diminished.

This year, through her position on the Senate VA Appropriations Subcommittee, Senator Murkowski obtained language in the FY17 VA appropriations bill urging the VA to reinstate the efficient, purchased care program that existed in Alaska prior to the Choice Act.

“I think there are still some huge problems in the implementation of the Choice Program that we need to address, and, unfortunately, these problems are profound in the smaller and harder to get places like Alaska. I think it is high time that Congress give the VA clear direction about the value we place on access to veterans' health care in those smaller and hard to get places. In many cases we know the dynamics of the local health care markets better than the folks in a central VA office.”

A full copy of Senator Murkowski’s address to the Senate can be found here.