WASHINGTON, D.C. – As the United States Senate debates the Defense Authorization Bill, an amendment filed by Senator Lisa Murkowski regarding the need for fully functional Small Unit Support Vehicles (SUSVs) — on the heels of her inquiry earlier this fall – has elicited a commitment to improve and overhaul the existing amphibious vehicles. 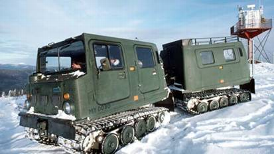 Senator Murkowski received a response from U.S. Army Chief of Staff General Raymond T. Odierno today (attached) informing her the U.S. Army plans to retain a fleet of 57 SUSVs in Alaska at Fort Wainwright, Joint Base Elmendorf-Richardson, and supporting the Range Control exercises at the Northern Warfare Training Center.  Additionally, Odierno wrote that the Army National Guard will conduct a “rebuild program” nationwide and fund the overhaul of 30 SUSVs per year through the end of Fiscal Year 2015 to ensure our equipment is ready for global duty.

“As the nation focuses on the Asia-Pacific region, we need equipment that can handle the wide variety of climates and landscapes,” said Murkowski.  “With increasing activity in the Arctic region and threats evolving from harsh, mountainous areas, the need for SUSVs capable of handling that terrain – and aiding our Alaskan-based troops in wintry exercises – is only going to rise.  We cannot put national security at risk by discontinuing the SUSV program.”

How We Got Here:
Murkowski filed an amendment late Wednesday (attached) that would direct the United States Army to investigate the current status of the aging SUSV fleet, which have a singular capability of handling harsh, wintry locations – like that of Afghanistan and Korea.  Senator Murkowski was following up a letter she sent to the Army Chief of Staff in September, where she stressed the need for the SUSVs.