Today U.S. Senator Lisa Murkowski applauded her colleagues on the Senate Committee on Indian Affairs for unanimously passing her legislation to strengthen and reform Public Law 102-477 (also known as the 477 program), a comprehensive Native employment and training program. The bill, which she introduced with Senator Dan Sullivan last May, surmounts bureaucratic obstacles to effective implementation of the program. The 477 program is unique because it allows tribes to pool money from different federal agencies to fund projects to tackle the dire unemployment conditions that plague Native communities nationwide. The bill now heads to the Senate floor for final consideration.

Introducing her bill to the Senate Committee on Indian Affairs today, Murkowski said:

“I think it’s one of the most innovative of federal Indian programs, because it enables tribes to bundle employment and training funds from various agencies into a single seamless program and apply the funds to the challenges of putting Native people to work in a manner that actually works on the ground. The program has met with some objections because of the very stovepiped approach that we happen to take around here. The amendments that we are considering today cuts through the bureaucratic stovepipes to make the program work better. It is long awaited by Indian Country—they have had task forces working on this 477 program for so long—and I hope we would be able to advance this measure and finally, and fully, resolve this.” 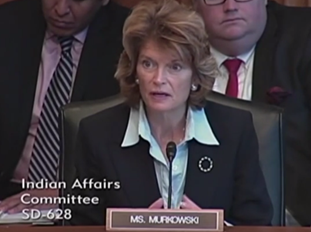 Background: Public Law 102-477 is the Indian Employment, Training, and Related Services Demonstration Act of 1992, as amended by Public Law 106-568, the Omnibus Indian Advancement Act of 2000. Public Law 102-477 is unique among Federal legislation, in that it allows Federally-recognized Tribes and Alaska Native entities to combine formula-funded Federal grant funds, which are employment and training-related into a single plan with a single budget and a single reporting system. The legislation involves formula-funded programs in the Bureau of Indian Affairs, the Department of Labor, the Department of Health and Human Services, and the Department of Education.

Despite its effectiveness at breaking down some bureaucracies, agencies have continued to push back on the 477 program and sought to return to processes where redundant requests and time-consuming administrative efforts are required to reach the same results.

This legislation aims to make the 477 program permanent, expand the types and sources of funding available, resolve plan approval and appeal processes, and ensure that funds will be transferred and require only one report.