U.S. Sens. Lisa Murkowski and Dan Sullivan, and Rep. Don Young today held a press conference to discuss their plans to work together to reverse the Obama administration’s decision to further block access to Alaska’s oil and natural gas resources in federal areas. 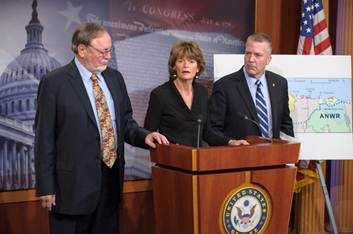 The administration on Sunday announced it was recommending that nearly all of the 19.6 million acre Arctic National Wildlife Refuge (ANWR) be placed into wilderness status – a move that would lock up the nation’s richest oil prospect. Interior Department officials also said the upcoming 2017-2022 offshore leasing plan would include withdrawals in Alaska’s arctic waters. The administration is also considering additional actions that would prevent new production in the National Petroleum Reserve-Alaska (NPR-A).

“It is a one, two, three kick to the gut of Alaska’s economy,” Sen. Murkowski said of the multiple actions being taken by the Obama administration this week. “We have said as a delegation that we will not stand it, we will not tolerate it, we will do everything we can to push back against an administration that has taken a look at Alaska and decided it’s a ‘nice little snow globe up there and we’re going to keep it that way.’ That’s not how you treat a state. Show us some respect.”

Sen. Sullivan vowed to carry the fight to the administration to protect Alaska’s economy and sovereignty.

“Today I stood with Sen. Murkowski and Congressman Young united in defeating this outrageous action from President Obama,” Sen. Sullivan said. “This attack on Alaska families and the middle class is deeply troubling. I pledge to do everything in my power to protect the economic growth and prosperity of our state, and defend the promises made to Alaskans under ANILCA.”

Rep. Young was also sharply critical of the administration and its latest attacks on Alaska, calling the wilderness push in ANWR a violation of existing law.

“This brazen assault on Alaska only strengthens our resolve to push back. This latest decision, in clear violation of ANILCA’s ‘no more’ clauses, completely undermines the law and the many promises made to the Alaskan people,” Rep. Young said. “This is unacceptable and I am already beginning work in the House to ensure this assault is stopped dead in its tracks.”

Full archived video of the press conference is available on the Senate Energy and Natural Resources Committee website.