WASHINGTON, D.C. – Senator Lisa Murkowski today testified before the U.S. Senate Committee on Foreign Relations about the multi-million dollar economic threat posed by illegal, unreported and unregulated (IUU) fishing to Alaska’s seafood industry, and the need for Senate ratification for the Port State Measures Agreement. Murkowski’s testimony took a unique and personal tone when she recounted that her own son is just returning to port after a season fishing crab, saying that strengthened laws have resulted in “a much better world for our crabbers and fisherman than just years ago.”

“It is important that Alaskan and U.S. fishermen have a level playing field when it comes to our fishing opportunities. Russian IUU crab has been a serious problem for Alaska since at least 1990.” 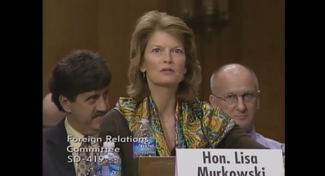 Murkowski went on to say that “as is true for most commodity markets, crab prices are driven by supply.  IUU crab lowers the market price to fishermen and processors, and tax revenues to the State of Alaska. The estimated impacts of IUU crab to harvesters since 2000 is about $560 million, with an additional cost to crab processing ports of over $11 million in lost landing revenues. These are real dollars that we are talking about and this has a real impact to Alaska.”

“Two of the treaties before you today, the Port State Measures Agreement and the Convention on the Conservation and Management of High Seas Fisheries Resources in the North Pacific Ocean, are of particular interest to my state’s fishermen. I believe the treaties before you will enhance the effectiveness of U.S. authority to deter IUU activities.”